Somewhat recently, the ever-excellent podcast Radiolab aired an episode all about colors and how we as humans perceive them.

During the episode, Jad and Robert talk to a visual ecologist about the fearsome stomatopod, which has 16 visual pigments (humans typically have 3).

Seamounts (underwater mountains) make up a a huge cumulative habitat type in the ocean, and distinct biological communities can exist on the same underwater feature.  As a part of an investigation by MBARI, Davidson Seamount and others offshore of California were surveyed with an ROV, and yielded some pretty spectacular underwater footage.

You can read more about this work at Davidson in this PLoS ONE article, authored by Dr. Craig McClain (of DSN notoriety) and colleagues.  If you listen closely to the narration in the video, you’ll hear Lonny Lundsten, a coauthor on the study, mention the idea that seamounts, while providing unique habitat in the open ocean, are not necessary the hosts of endemic species (species that are restricted to a single geographic locale).  More about that here.

Perhaps the largest, most visible, macroecological trend on this planet is that there are generally more species in the tropics (low latitudes) than the poles (high latitudes). This pattern has been observed in both terrestrial and marine systems, across hugely varied groups of plants and animals. Despite the fact that this has been known for awhile now, no unified model exists that explains how this latitudinal species gradient came about or what mechanism(s) act to maintain it (intriguing hypotheses abound, however, including faster speciation in the tropics). What the structure of this gradient was like in the past is uncertain as well; for example, how stable this pattern is through time?

A recent paper in Ecology Letters by Dr. Yashuhara and colleagues uses paleotemperature information and diversity data of tiny planktonic critters called formaminfera (forams, if you’d like fit in) to investigate this latitudinal species gradient at various snapshots through time, over the past three million years.

Planktonic (residing in the water column while alive, rather than at the bottom of the sea in the benthos) forams as a groups are hugely abundant; deep-sea sediment in some parts of the world can comprise of almost 70% of forams, particularly their tests, or tiny calcium carbonate shells. Scientists have been studying forams in depth for some time now, in no small part due to their importance in studying past climate and oceanic conditions, and as a result their taxonomy is well-known. So if you’d like to take a detailed look at the latitudinal diversity gradient in the ocean over time, this is a good model system for that.

Using past datasets consisting of foram diversity and reconstructed sea-surface temperatures, the researchers investigated four specific temporal snapshots: modern, 18,000 years ago (Last Glacial Maximum), 120,000 years ago (Last Interglacial), and 3.3-3.0 millions years ago (in the Pliocene). They found that unimodal (think a relationship with a single hump-shaped peak) relationship between species diversity and latitude for all time points, with diversity generally peaking in the subtropics and falling off rapidly towards the poles. Additionally, used the reconstructed sea-surface temperature dataset, they found that species diversity tracks closely to temperature. For example, diversity was highest in the mid-Pliocene samples when it was the warmest of the time points considered here, and lowest during the last glacial maximum, the coldest. The authors even point out that the latitudinal diversity gradient was steeper during the last glacial maximum (i.e. the diversity in this set of samples decreased faster–at a steeper slope–towards the poles than the other time points), but this is likely due to the fact that the temperature is known to change more drastically with latitude during this time period.

This is important because it indicates that temperature has a big role to play in determining what species (and how many) live where. It also shows, as other studies have, that temperature is an important predictor of diversity in the ocean. This work’s central finding shows that this relationship has been robust at these various time points throughout the last three million years, even when examined at very high taxonomic resolution. Paleoecological work is really interesting and hugely useful in this vein; it can show us how things like climate can affect biodiversity over large timescales, and allow a different perspective of how large ecological patterns work. 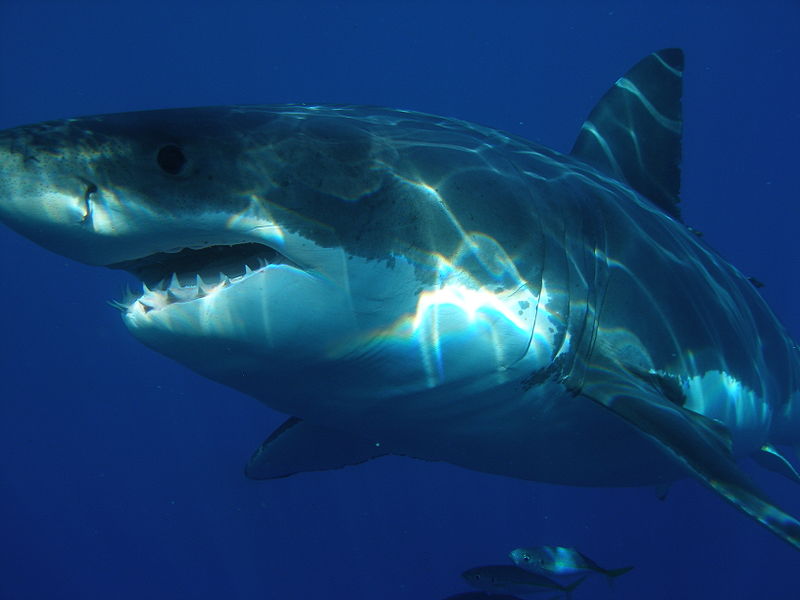 In the throes of this year’s rendition of Discovery’s cacophony of teeth and excited narration, I think it’s prudent that we keep in mind that sharks are way, waaaay down the list of things that could potentially kill you. In 2011, for example, there were 75 total, both fatal and non-fatal, shark attacks. Loss of life is tragic, and there is always some risk associated with being in the ocean. That being said, you have a enormously higher chance of falling victim to car accidents, the flu, drowning, lightning, cancer, heart disease (these and more at this list, a small sampling, but I think you get the idea) than to the great toothy beasties of the deep.

For a longer, and generally more complete take on that, see this post I wrote on the onset of last year’s Shark Week (located an embarrassingly few number of posts down from this one).  If you’re interested, here’s the page for the International Shark Attack File, and here’s the summary for the 2011 shark attacks.

And we’re back!  After a year or so hiatus, it seems.  The past year has been busy!  I’ve been getting established into my new PhD program, writing grants, other typical grad-studenty type shenanigans.

But anyway, the important news:  Uncharted Atolls is getting rebooted (no, not like that), so watch this space for eco/evo papers/topics that I need to talk about here, as not to annoy my wife and cats too badly.

Also, I will be in Panama this fall, so I’ll likely be talking about what took me there in the coming months.

The Visions ’11 cruise is streaming live deep-sea video footage via an ROV puttering around in the depths.  Read more about the cruise here and check out the live video feed here.  (If you’re having trouble with the feed, right click/command click on the video, hit ‘settings’ and uncheck the ‘enable hardware acceleration’ box.)  This leg of the cruise is over Axial Seamount in the Pacific. 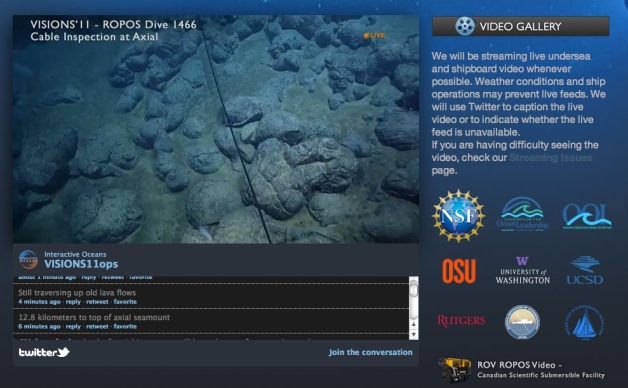 Via Alden Denny, geology and GIS extraordinaire.  You can follow expedition updates on the twitter machine @VISIONS11ops.

Despite the resilience of corals as a taxonomic group through geologic time, warming oceans, shifting seawater chemistry, overfishing, pollution, and disease currently threaten these habitat-building invertebrates with many coral reef ecosystems in a state of decline.  Researchers have identified a bacterium, Serratia marcescens as the cause of a disease called white pox in elkhorn coral (Acropora palmata).  White pox, more formally known as acroporid serratiosis, can lead to tissue loss and potentially the death of the coral colony.  What makes this especially interesting is that S. marcescens normally causes health troubles in humans–this is the first evidence of a human pathogen to a marine invertebrate.  Acropora palmata was once the dominant coral in the Caribbean, especially in the forereef and reef crest, shallow spots with high wave action.  Today, populations of this coral species has been decimated, reduced by up to 95% in abundance since 1980, and is now considered critically endangered by the IUCN.  Much of this decline is attributable to disease, along with other factors that compound this plight–for example, this species is particularly vulnerable to bleaching.

Previous work done in 2003 noted that S. marcescens was found in both untreated human waster and within A. palmata suffering from white pox, suggesting a relationship between the two.  In a new paper published this week in PLoS ONE, Dr Katheryn Sutherland and colleagues used Koch’s postulates, a standard method for showing disease causation, to  investigate the relationship between the two.  In short, fulfilling these postulates requires researchers to be able to isolate the suspected pathogen (S. marcescens) from the host coral and grown up in culture, the disease to manifest itself when a pure culture of the pathogen is introduced to the host, and isolated yet again from the experimentally-infected host (more on Koch’s postulates here).  The results show that S. marcescens is capable of causing white pox in this coral species speedily, with the coral losing tissue in as little as four days (see figure below). 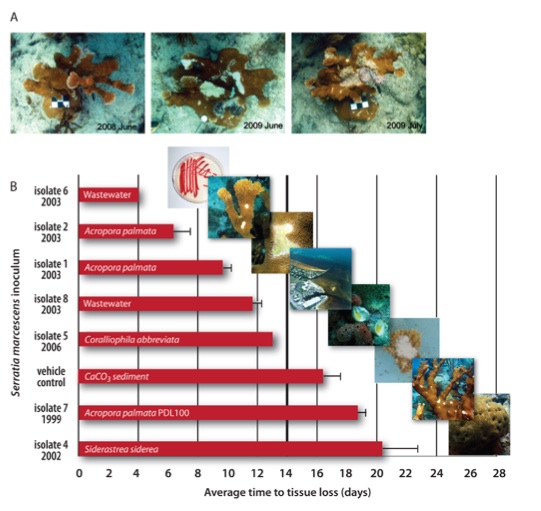 While this disease is specific to this particular coral, the researchers also found that other coral species could possibly be acting as reservoirs for this pathogen while in seawater, given that the pathogen itself is not adapted well for life in the ocean.  Additionally, a coral predator, a snail, may act as a disease vector or reserve.

Improving wastewater containment and treatment in areas such as the Florida Keys can reduce this pathogen’s transmission, and efforts are ongoing in Florida to improve wastewater management, though this issue is occurring in the wider Caribbean as well.  This study shows an exception to the usual animal-to-human transmission model, but also that this pathogen, found in land-based mammals (us), can cause a disease in a marine invertebrate, jumping not only into a profoundly different environment but also into a much different animal, a colonial invertebrate rather than a vertebrate.  Responding to this issue would be obviously beneficial to corals themselves, but also to human health and for the economies that depend on reef habitats for tourism and resources.  The dynamics of this disease are yet another example that illustrate the interconnectivity of society, ecosystems, and economics.

1 live reef shark in Palau = 179,000 USD in the ecotourism industry.  Or killed and sold once for 108 USD.  Just economically, not even considering the ecosystem services involved, sharks are worth much more alive.  This has been in the news for a bit but worth pointing out especially in the wake of Shark Week. 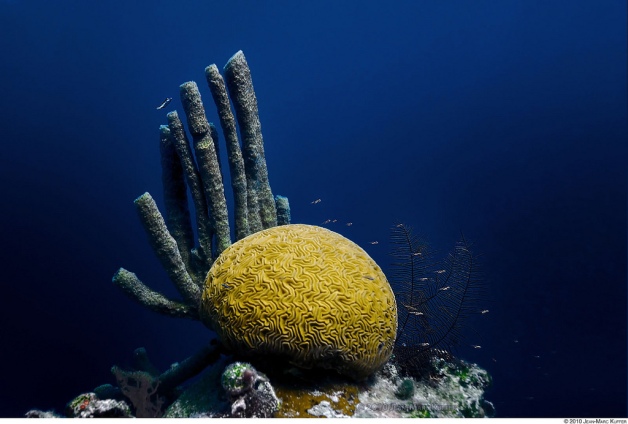 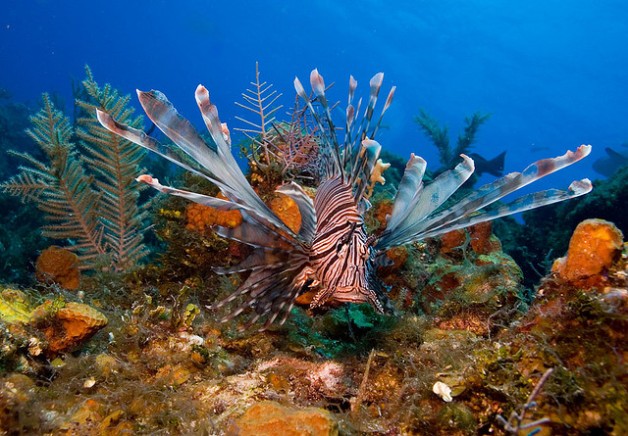 Lionfish (Pterois volitans and P. miles) populations have drastically exploded in the western Atlantic and the Caribbean in the past decade, and not without attracting some attention. The trouble is that these gorgeous fish sporting an array of venomous spines are invasive species.  They naturally occur in the Indo-Pacific but have been introduced to Florida via aquarium releases and are now potentially causing significant changes to marine ecosystems, the inhabitats of which have not evolved with this fish.  They can now be found from Costa Rica and Venezuela up the US eastern seaboard to Rhode Island, a truly impressive extent considering the first individual was found offshore of Florida in 1985.  Recently, I was fortunate enough to dive in Roatan, Honduras on my honeymoon and lionfish were a relatively common sight, despite their efforts to hide among the barrel sponges on the benthos.  They could potentially spread well into the southern hemisphere, along the the coast of South America, based on the lethal minimum water temperature [pdf] for this fish (10 C).  Lionfish feed upon the larvae of reef fishes, undercutting the next generation of fishes.  They can spawn year-round and release buoyant egg masses that can float in the currents for weeks, ensuring a wide distribution. 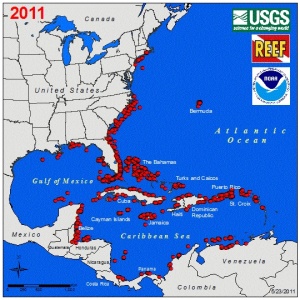